The Crimson (Conf 10-2; Overall 18-7) looks to return to the top of the Ivy League standings after five conference titles over the last six years.  Come out and cheer our team as they take on the Quakers at the Palestra on March 4th! 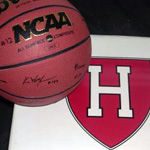 Tickets are $9 for members / $14 for non-members and will be available for pick-up at the Will Call window the day of the game under Harvard Club/ticket purchaser's last name.
If both Penn and Harvard make it to the conference playoffs, the league will host its first playoff game in advance of the NCAA tournament in Philadelphia. The top four men’s and women’s teams will travel to Penn to play on Sat. 3/11, with the finals on Sun. 3/12.
Order tickets by March 1st.